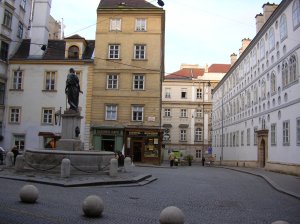 When a young waitress at the 1516, 18 Krugerstr,Vienna, Austria, found that we were visiting from Canada she excitedly told us this story. She said she had taken the trip of her life to Ontario, Canada. She had flown to Toronto, with a brief stopover, and then had flown on to Sioux Lookout in the far northern part of the province to spend a summer week in the forest, presumably battling black flies and stiffling heat and humidity. She claimed that Europe did not offer such fabulous opportunities for adventure. We were suitably awed, having given up camping many years ago after being soaked in a tent.

On the positive side, the 1516, a brewpub, brewed a very fair match of an American style pale ale called Victory Hop Devil. I made several visits to the 1516 to sample this fine ale, having had my fill of pilsners, lagers in any other language. On one such visit, I found the meticulous brewers pouring over the brewing notes for one of the beers brewed on-site, making sure that no errors in ingredient calculations or times for hop additions occurred.

Sitting outside the 1516 drinking beer, what else, I observed a very well dressed woman with a swank car who came to the rear door of the car, opened it and meticulously placed her sizeable black handbag on the back seat. She closed the door sharply and then opened the driver’s side door, got in, closed that door, cranked the engine and drove off.

I ordered another Hop Devil. 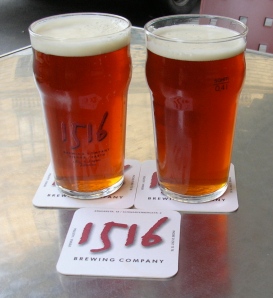 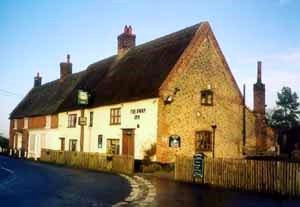 The Swan, a 14th century thatched and flint building, is owned by Woodforde’s Brewery and as such you can expect a well-kept pint of Wherry Best Bitter, as well as many of the other cask ales from the full and exquisite range.

Having driven from Yorkshire, and taking three and a half hours in the last stretch from Lincolnshire, mainly in a light misty rain in the pitch dark, which descends sharply at four p.m. in December, I had developed a powerful thirst. I pulled into the parking lot just after the six p.m. pub opening. I went straight in to the bar and ordered a pint of Wherry Best, which I quickly consumed. Deliciously hoppy. I ordered another pint of Wherry cask ale that slid down almost as easily as the first. When I asked for a third pint on the trot, the frowning barmaid interjected–she wanted to know if I wanted to be shown to my room? To which I replied, not until I had finished another pint of Wherry. My car was parked for the night, I reasoned, and my room was only located across the courtyard so no harm could come.

Paul and Jan, the landlord and landlady, who are very friendly, served up fine food and ale. Admirable accommodation was located just across the courtyard in a separate building, a former horse stalls.

Apparently, the farmer who owns the adjoining land has a right of way through the heart of the property and over the courtyard and doesn’t fail to use it at times inconvenient to the pub’s outdoor festivities such as weddings and summer fetes.

Not to be missed for the pub itself, both interior and exterior, the friendly welcome, the fine ale, the excellent food. I’d highly recommend the rack of lamb with rosemary cooked to a deliciously tender medium rare.

Next door at the Anglican church there are two enormous, as in as big as trees, rosemary bushes bracketing a side door to the church. Now if we can only get the lambs to dine on rosemary and garlic as well as lush, green grass. 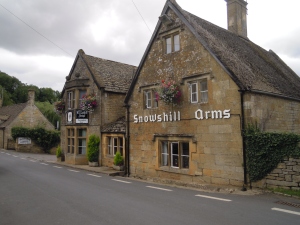 The Snowshill Arms, in the tidy village of Snowshill, Gloucestershire, built of the luscious golden Cotswold limestone sits near to an eclectic manor house held by the National Trust. By all means visit the manor if you are thus inclined but I usually come for the local brew at the Arms. Or, at least, I used to whenever I was staying in Broadway, just down the hill.

Donnington’s Best Bitter, or BB as it is known locally, is normally a superbly balanced bitter, after a spell of being too malty. You could get a pint of good real ale here, as well as food that was tasty too.

Sadly, on my last visit some years ago, the barmaid served SBA, which was plainly off, tasting sour and mean spirited. I returned the pint to the bar and was offered a pint of BB, which was only marginally better, lifeless, though not yet sour. When the publican returned, the barmaid related my concerns to him. He sampled a bit of the SBA and declared it fit for drinking. I then heard the barmaid telling another patron in a voice loud enough for me to overhear that:     “Someone earlier said the SBA was off but Dave says it’s fine.”

Well, if Dave says it’s fine, it must be so, though I’ll be drinking elsewhere. 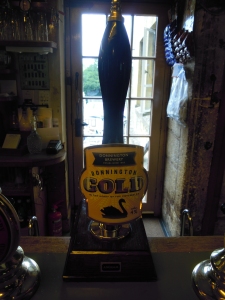 After an absence of some years, I took it upon myself to chance a return visit to the Snowshill Arms. And I’m very glad I did as I found a relatively new golden ale brewed by Donnington, simply called Donnington Gold. It was a superb jar of hop laced ale that went down a treat. I had another pint and rejoiced at the resurgence of a great village pub.

Even saw Dave behind the bar. He said hello and we exchanged pleasantries. He must have recognized me from the Crown and Trumpet down the steep hill in Broadway where he pops in  for 11 am opening, has a jar of beer and a convivial conversation with like-minded early pub goers. Cheers, mate!